It has been an adventure. There is no other way to describe the past few months. 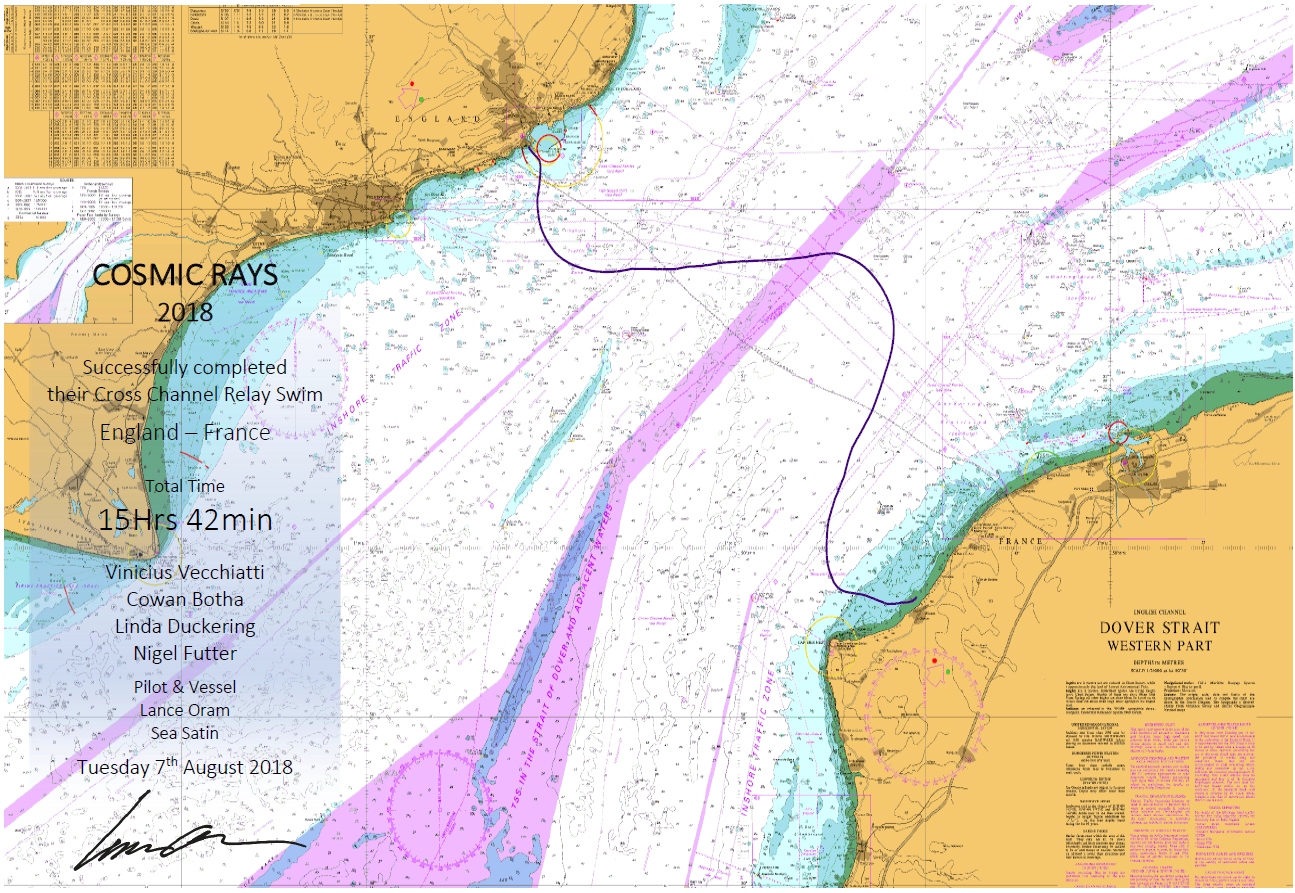 1. Getting a place
Everything started after swimming for 30 min without a wetsuit and not freezing to death. That gave me the “brilliant idea” that I could actually survive the channel swim. With a casual talk with Alice and Nigel about their preparation for the swim and about Debbie Cox getting a very last minute place was enough to make me start my Facebook hunt posting in different forums and pages asking and begging for a place. Spoke with Bex and Sam, both have done it in the past, trying to convince them to do it again, but no luck. Not much later I was contacted by COSMIC Rays Channel Swimmers coaches Andre and Parviz. After them explaining how the Channel swim would work and all about the charity, I was hooked!

The team was formed of 4 swimmers, with different abilities, different goals and backgrounds. Special Thanks Alice, Debbie and Sarah (Andre’s wife who found me on Facebook hunting – COSMIC), and of course Bex and Sam for sharing their experiences. [Boat: Tick!]

2. Qualifying:
Fairly ease to qualify, just pay the fee, get a medical form stating that you are healthy and swim for two hours nonstop in a below 16 degrees water, Easy-peasy! Apart from the fee that was reasonable cheap (only £20) the rest was a little bit tricky. GP booked, I had to explain that even having some chest pains I was still feeling ok for the swim – he didn’t hesitate and signed the form, still not feeling well and still feeling some chest pains though. Considering that until then my longest swim was 50 min and the 2 hours looked very far from achievable. Anyhow, I drove to Bournemouth to swim with the supervision of one of the COSMIC Coaches, Parviz. Sam Perry entered the water saying he would do only one hour to support me , with wetsuit, boots, gloves, balaclava, etc. Thankfully he was there for the whole time and swam with me for 2 hours. I would not be able to do it alone. The sea was below 14 and quite choppy. I confess that for moments I was swimming with my eyes shut and trying to relax as much as possible. Special thanks to Sam. [Qualifying: Tick!]

Still don’t know about this part…. Are we supposed to train for this kind of thing?

Well, I never swam that much in my entire life… and to be honest I am not much a swimmer and I have to confess that I started not long ago, but I believe this is another story to tell.

Basically my training was swim as much as possible, with Bex, Ana, Michelle, Sam and many others from the Club. Every time it was skin swim, wetsuit wasn’t an option, 100% in the sea with an average of 30Km/month.

Thanks for everyone that joined the usual Official Tuesday and Saturday swims, Unofficial swims on Thursday or any other day. Of course, special thanks for the weather that was awesome! Water was very warm after the qualifying. [Training: Tick?!]

4. Big day
I will spare you all with the faff bit of driving to Dover and “sleeping” in the car bit. I was the first swimmer in, so I started swimming from boat to the shore and started from the Shakespeare Beach. It is nice to swim in the dark gives you a different perspective and no clue where you are in the ocean.

It goes very quick, hard to imagine that we stayed on the boat for over 15 hours. 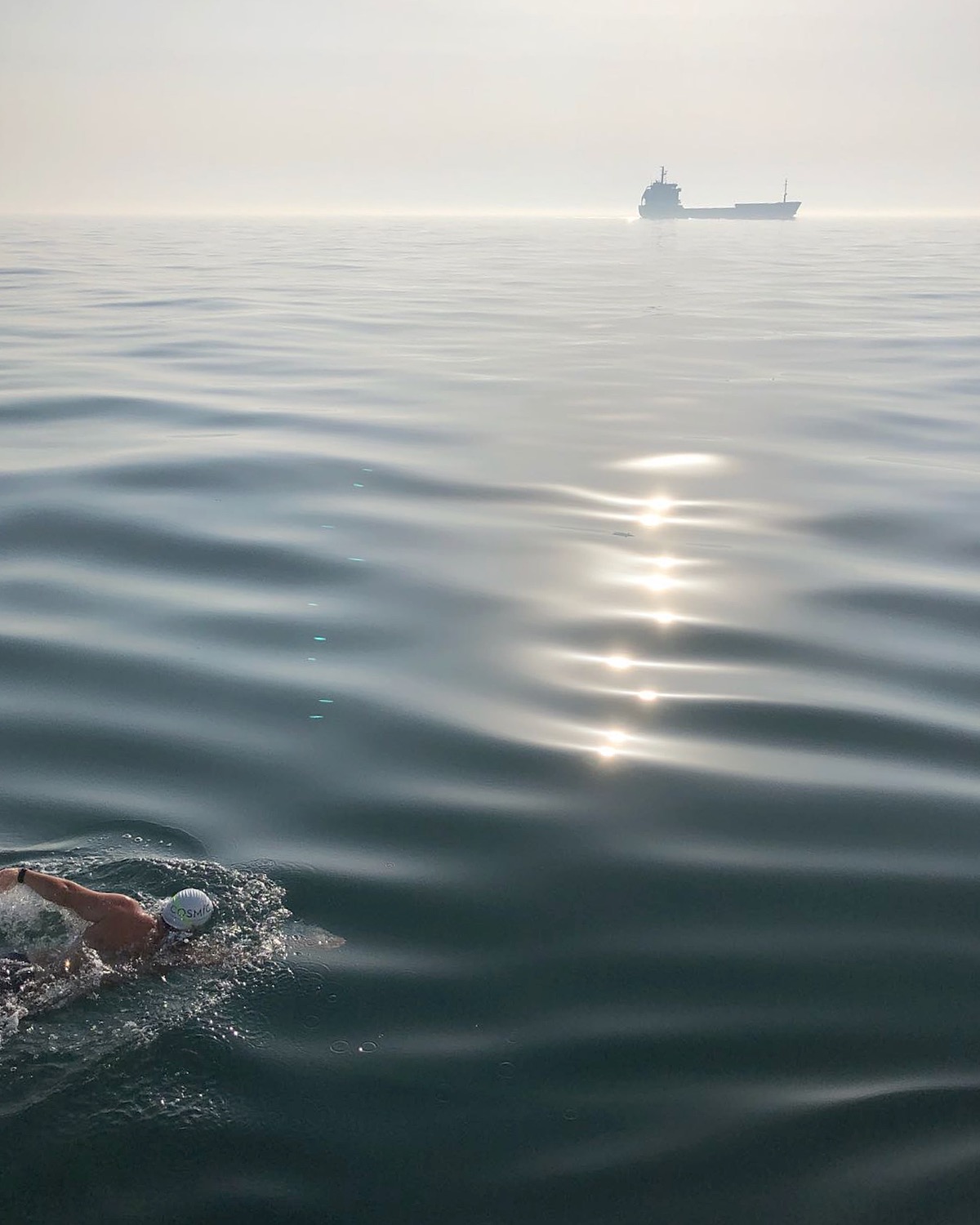 It was pretty much like…. Swim for an hour, stay in the boar for 3… swim for an hour… 3…. Until we reached the other side. We saw dolphins, seals, Japanese and Russian warships, usual container ships and lots of ferries. Oh! Of course… jellyfish! So many of them, but luckily far from me I avoided them (or they avoided me)….Unfortunately others from the team can’t say the same (thanks guys for taking the hit for me).

Rather than describe everything, make some popcorn and watch the movie! HERE

The weather was perfect. I never saw the sea so flat and calm.

Special thanks, for all Gods (Sea, Wind, Sun, …), my team COSMIC Rays 2018 and supporters. Without your donations would not be possible. [Channel Swim: Tick! – Relay though]

5. Conclusion
Alice asked me: “What were the highs and lows?”

and I said “No lows. Great adventure!”

Everyone should do it at least once… or twice…