Do you remember that bit in Alien 3, when Ripley is trapped against the wall of her ship, cringing away from the dripping jaws of the shiny, petrifying alien? Good, I’ll leave that image with you, ready for a little later in my report. 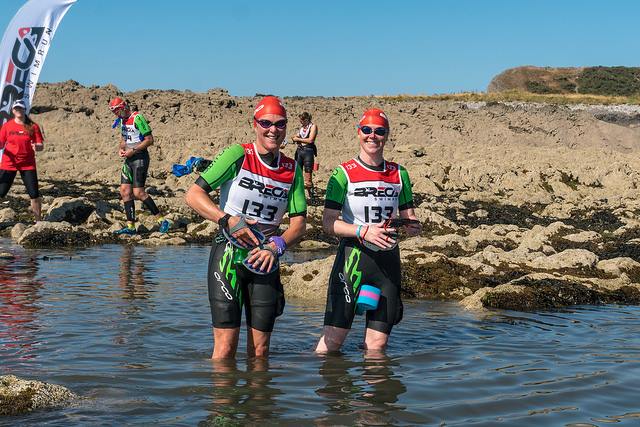 Just before 7 am on Sunday 8 July I was to be found on the coastal path to the south of Rhossili Bay beach on Wales’ obscenely picturesque Gower Peninsula awaiting the start of the second Breca Gower Swimrun. For the uninitiated, swimrun—not to be confused with aquathlon (which is just a swim followed by a run)—originated in Sweden and usually involves a pair of athletes (it’s too dangerous to do alone) running and swimming (and running and swimming, and running and swimming…) pretty big distances (in this case over 42 km), in the same outfit (just work out the logistics and all the fab new kit involved in that; also, not literally the same outfit, I mean you run in the same outfit you swim in, not the same one as your partner), around some incredibly scenic, and sometimes slightly out of the way, places.

Accompanied by my swimrun buddy, Lulu, I was pretty excited by what lay ahead. The sun was uncharacteristically doing that glowing thing, making it already a touch beyond toasty, particularly when wearing neoprene, and bathing 69 swimrun teams in a glorious amber glow.

The first run (one of nine, interspersed by eight swims) would be quite brief, so some teams had already opted to fully wetsuit up, swim caps, paddles and all. Lulu and I were a touch more casual, our aim being to survive. We were one of only three all-lady teams in the race; on our virgin swimrun outing, we just needed to get to the end to stand on the podium.

We were off, chasing around the perfectly manageable terrain of the coastal path, chatting excitedly to some very fit, handsome, male swimrunners and just generally enjoying ourselves. Swim 1 took us out to Worms Head, which is cut off from the mainland for most of the day. We swam over to it, and scrabbled over the rocks up onto the coastal path before running back over the momentarily exposed rocky beach. As a team, we swam comfortably alongside each other, having been fearful we’d lose each other once everyone had the same coloured swim hats and safety vests on. We even passed a few people who’d entered the water before us. I felt good. I clocked a few small jellyfish far below me, but was more concerned with finding the exit and not getting caught up in the rush to clamber back up onto the trail. The terrain on Worms Head was not friendly, the rock formations were sharp and jagged and I saw blood where someone must have gashed themselves. But we were soon at the far end of the isthmus, high-fiving the marshal and running back along the other side through the shallow rock pools revealed by the exiting tide. The racing snakes were already a distant blur and we settled into a pace towards the back of the field for run 2.

The coastal path really did look lovely, incredibly scenic, but it was very exposed. We followed a series of red arrows pointing the way discretely and chatted to some more teams. We were in good company, a range of Ironmen, swimrun regulars, a couple of former Welsh rugby players, and Batman and Robin. It was fun. I felt a real sense of camaraderie. I was basically a bit hyper. There’s always a marshal to instruct you into the swims, pointing out the red exit flag in the distance and giving guidance on the best route to take to reach it. There were more small jellyfish on swim 2. Lulu hadn’t really noticed them yet, but I can’t help search out what’s in there with me, even if it’ll terrify me. We passed some all-boy teams and emerged from the sea onto an amazing little beach, completely empty except for swimrun teams and event people. It was glorious. We were in paradise. I felt like Sofia Loren, I looked like a bedraggled mess. I was so bloody happy.

Run 3 was about 9 km. We stripped down the wetsuits to our hips, a team task well practised over the course of the race. The trick is not to lose your water bottle, which I had zipped into my neoprene so as not to lose it on the swim. The first checkpoint was a couple of km into the run. We were passed by the guys we’d just overtaken in the water, playing a game of cat and mouse that would last several transitions. I had the dibber fastened around my wrist, officially the grown up of the team, ready to check in at the safety points. The checkpoint marshals were lovely, and the tables well stocked with food, fluids, sunscreen and lube. Swim 3 required a bit more patience, heading out across the bay a bit and then back directly in to the beach. Swim 4 appeared remarkably quickly. We were told to swim out to a kayaker for further instructions. He then directed us towards a SUPer and from there to the beach.

This was a longer swim, about 1.2 km. We hadn’t gone far when the smaller jellyfish appeared, much closer to the surface than the ones I’d spotted earlier. Then followed some slightly bigger ones. I concentrated on my stroke, keeping close-ish to Lulu; there’s comfort in knowing someone else is nearby. We were perhaps three metres apart when the absolutely f*@k*ng massive barrel jellyfish glided straight through the gap between us. I could hear a strange gurgle from the direction of Lulu who’d obviously finally understood my earlier jellyfish paranoia. We were still pretty close to the entry point, but there was no going back and no abandoning the race. I swam on, watching as huge gelatinous masses glided past me, in what seemed like a constant flow. The little ones were still persisting too. A medium-sized bugger chose a moment about halfway through the swim to glide in front of my face and then swim inches away from my body, all…the…way…down…my…body. If I could have hovered above the surface of the sea, that’s where I would have been. I was swimming so shallowly I was hardly in the water. (This is the Alien reference bit by the way, in case you miss it.) Just when I thought it was over and we hit shallow water I was suddenly surrounded by loads of little jellyfish, in a patch of oddly warm water. I swam on, swearing outrageously in my head. I was delighted when we hit the beach. There was a dead one on the beach, it was massive and alien-looking. I felt (very briefly) a bit sad for it.

We ran on. At the aid station I smeared as much sunscreen over my face, neck and head as was possible (shame I didn’t do my arms too, ouch). Run (whatever number) was along Oxwich beach, a 3 km stretch of sand. We now had an audience, holidaying revellers were entranced by a meandering trail of sweaty, salty swimrunners shuffling towards the next headland. At the end of the beach we hopped back in the sea, swam around the rocks and got out at a small beach across the bay. The next run was the second long one, 8 km. We were both tiring a bit in the heat. Plodding. So, of course, the exit to the coastal path was up a big sandy dune. It killed the legs, zapping my energy. Thankfully, the next checkpoint was just a few km in. Salty potatoes and jelly babies saved the day. We both got very excited when we reached the next beach. Beach meant swim. And all the swims had so far arrived just as I was beginning to overheat. I was mentally trained now to know this was how it worked, so the fact we were actually supposed to run along the beach and up another hill was tortuous.

But swimrun ain’t the boss of me, so we got in the sea anyway and cooled off. Around a couple more bays we finally found the next swim. We strolled down onto the rocky shore at Caswell Bay, clambering past bemused sunbathers and, after a sip of icy water from a marshal, we were back in again. Swim 6 was a bit choppy and thoughts of other sea life started creeping into my head. I was tiring, my arms ached when I tried to pull properly with my hand paddles. I told myself to concentrate harder, to be better, and swam on. We approached swim 7 over a grass bank, only seeing the entrance point down on the rocks below as we arrived at the edge. We’d finally hit slack tide and could just swim across to the bay opposite, aiming for a rocky outcrop. It may have been slack, but that rocky outcrop took a long time to get to. I voiced my fears to Lulu, who supportively told me to just keep plugging away at it as we’d get there eventually. I was confused by the final swim as we approached it by running uphill towards the Mumbles coastguard station. But what goes up must clamber down over some rocks to the sea.

Swim 8 was short and contained lots of seaweed, which I hate to encounter almost as much as jellyfish. But, once we were out, I was immediately overwhelmed by inexplicable sadness that it was our last swim. We stumbled up through a nature reserve and followed the arrows around the random little footpaths of town before descending into a park. Lulu excitedly announced we were finished, but I couldn’t hear any race finish noise so I told her not to get her hopes up. But then a voice came through the trees and as we rounded the bend people started to clap. We were announced as the second ladies team to finish. After eight and a half hours of swimming and running, we clasped hands and ran over the finish line, giving the race organiser Ben, who was there to greet each team, a sweaty, salty hug. In conclusion, it was absolutely bloody brilliant. I can’t recommend it enough.