I have always done a bit of cycling and swimming and having more recently taken up running, I had a vague thought that triathlon could be for me. Last year I started to run with Alexandra Hemingway (a former colleague) and after expressing a desire to swim in the sea she sent me down to the beach hut. Once I’d bought a (rubbish) road bike triathlon became inevitable. 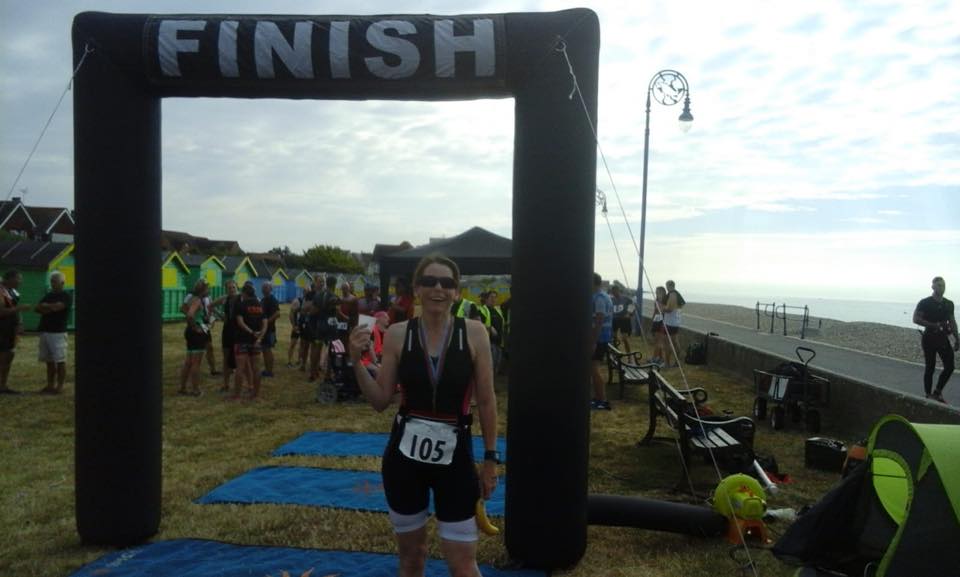 The morning of my first race did not start well.  I missed 4 alarms buzzing on my wrist and was only woken by Axie phoning from the door. She was extremely patient while I faffed around the house in my pants.  We were out of the door in 10 mins and fortunately my bike was already on the way to Bognor with Rupert and Elliot.  It was perfect conditions at Felpham sailing club and helpful club members helped me set up. Thanks in particular to Elliot for turning my socks the right way round!

I was most worried about the swim as my training consisted of one or two swims a week to the fence and back.  Even over that short distance I often feel like I’m having a heart attack.  On the day I just got my head down and got through it, I wasn’t straight or quick, but I didn’t panic as I often had in the Solent. I couldn’t see many people or bikes around when I got out and I could tell by my Dad’s face that I had slightly let down the family name (he once swam from the Isle of Wight back to Gosport).

I was pleased to be back on dry land on the bike and have my fitbit on (must get a tri watch).  It told me that I was cycling faster than I ever had in my life, a major morale boost! I really enjoyed the 20km cycle and saw lots of PT members, hollering at them as they passed the other way.  When I got back into transition I was so excited to see my family that I ran my bike straight into a fence and got it stuck.  Fortunately there was no photographic evidence and I was quickly free and off on the run.

I’d tried running off the bike a couple of times and had surprised myself with how fast I could go. It was tough but I managed to keep up a good pace for the 5km.  Looking at the results afterwards I was the third fastest female on the run at 22min52.   Astonishing! My younger self would never believe it!

My overall time was 1 hour 29, much quicker than I expected and I thoroughly enjoyed it.  It was such a success I almost feel like I should quit while I’m ahead.  However, I’m already making plans to improve my swimming….and I probably need a better bike….