We started planning this trip in November last year.  After months and months of early mornings and late night training sessions it is finally here …….

With 48 hours to go I really didn’t need 24 hours of D&V, which left me drained and in tears, having to go to a school tutor meeting with my jeans over my PJs, carrying a sick bowl.  Nice. 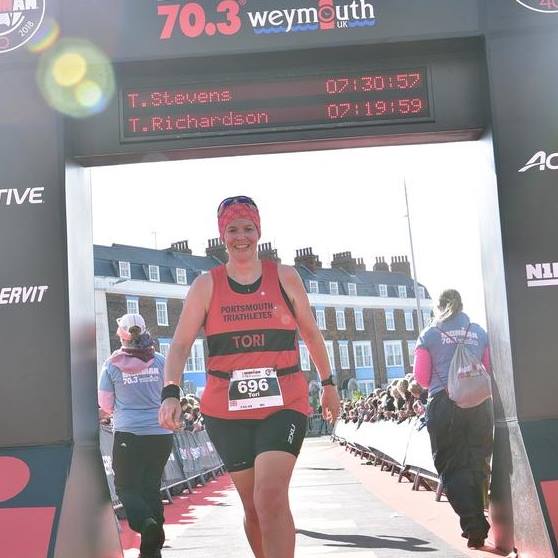 By the Friday  I felt a little bit better so decided I would pack my kit and at least drive to Weymouth, figuring I could support if not compete.  I managed a bowl of rice at lunchtime and kept on with water and tailwind.  I packed the last of my things in the van and headed off to collect my partner-in-crimes-against-triathlon, Fran.  With her kit loaded on board too, we set off for Weymouth.  We were playing ‘spot the triathlete’ on the way, with lots of very nice bikes on bike racks, obviously all heading to Weymouth too.  Lou Miller guided us in to the caravan park, by moonlight and Elliot helped me lug my kit over to the second caravan and get settled in.  We then mustered back in Fran/Lou’s ‘van to form our plan for the next day.  Still sipping on the Tailwind and not much else.

Saturday dawned and I went through my kit one last time as I forced down a bowl of porridge.  Back to Caravan number 1 to rendezvous with Will who was coming with Fran and I to register.  We headed down to the Pavilion, and bagged a lucky parking slot on the harbour carpark.  Registration was painless enough, although still feeling lousy I kept bursting in to tears everytime someone spoke to me.  I was really worried about the amount of calories I was (or wasn’t) taking on board.  We moved from Registration to the Expo to search out IM branded goodies.  You could very easily spend a fortune on Merch.  I stuck with one current year t-shirt and one from the sale rail.  Bec Mason’s lovely family turned up en masse.  Bec’s Dad is a retired GP and at her request he took me to one side and talked about how I was feeling and what my best plan would be to take back on board some calories and salts etc.  We headed in to the Pavilion for 12 noon briefing, and the theatre was full of anxious, soggy triathletes.  The IM Machine was in full swing with a chirpy Compare and a full screen slide show taking us through all the dos and don’ts for the following day.  We were spoken to by the Race Director and the Chief Referee.  A quick stage invasion for a photo with Pompey Tri and we were back in the van to head off to rack the bikes and hang up our bags.  With over 1500 triathletes trying to get along the seafront, it was total gridlock.  We managed to gain a small advantage by nipping through some back streets, ending up on double yellows as close to Transition as possible.  With about 100 folk ahead of us, racking took about 30 minutes.  On our way out the queue going in had increased to over 500 waiting to get in, all absolutely sodden in the still pouring rain.  Not my idea of fun.  With other Pompey Tri staying on the same site, there was a Pizza party at Caravan 1 with lots of great tips from the seasoned pro’s.  The consensus was that I was looking much better than when people had seen me earlier in the day.  When Lou started washing up we got the hint it was time to go to bed and set our alarms for 4am.

Sunday – after not much sleep I was up before the alarm, forcing porridge down my neck,  checking my nutrition for the bike, repacking my ‘white’ bag and pulling my wetsuit on over my trisuit.  I still was not 100% that I would make the start line but was trying to put a brave face on it.  We left the site in convoy at 5am heading for the College car park.  An earlier than expected road closure saw us taking some crazy diversion through the Weymouth housing estates, but what a great tip the Weymouth College car park was – right at the back of Transition – genius Bec, I salute you!  With my tyres checked and nutrition on the bike, it was time to head over to the beach.  Pompey Tri were loitering on the Prom so we joined them for pre race banter, and black humour about Ironman Body Bags.  We then heard the announcement that the swim would be shortened to 950m for safety reasons and the start put back to 7.30.  No-one was thrilled at having to wait longer in the cold, but there was nothing that could be done.  At about 7 we stripped off our hoodies, and deposited our white bags on the trucks to go to the finish.  Weymouth is a self seeding swim so we found the 40 minute swim marker and stood waiting in the freezing conditions like penguins in the Antarctic.  We got talking to some girls next to us, one of them had never done a sea swim before!  Rather her than me!  We invited them all down to swim with us on the next Summer Solstice. I was relived to be with my mermaid buddies during this enforced wait, they kept me calm and I soaked up their positivity by osmosis.  We eventually stated shuffling forward, then down the beach to the start where we were sent off 4 abreast at 5 second intervals.  The sea was welcomingly warm, and although far from calm it was not as rough as we often have it at Southsea on our weekly swims.  Through my misty goggles I could only see the first sighting buoy so headed off that way.  The first turning buoy was a bit of a bunfight but once round the mark, it thinned out and it was full steam ahead along the outer edge of the course. Before I knew it I was round the next turn point and I could see the red exit arch on the beach.  I counted my strokes and kept turning those arms.  I was hauled out of the water by big Gary Ingham, unmistakable with his silhouette and huge red beard!  I was very pleased to be grabbed by him.

Running up the mat, remembering to smile for the camera, wetsuit half down and on to T1.  I grabbed my Bike Bag, emptied it and put my now discarded wetsuit, hat and goggles in.  As quickly as possible I put on my layers of bike gear, opting for the full gloves that I had thrown in last minute.  Getting to my bike I had no option but to run through a puddle that was ankle deep.  Great.  Soaked feet already.  Able Mable was right where I left her, I grabbed her and pushed her out to the mount line.  As soon as you hit the seafront you were hit by the wind and sideways rain.  I just said to myself, get the first 10k done and see how you feel, and that is how I got round the whole bike course, breaking it down in to 5 and 10k chunks.  Once I go tot 45k I knew it was quicker to press on and finish rather than turn back.  The rain and wind stopped and restarted, but fingers remained numb, making braking and changing gear a challenge.    The number of casualties was phenomenal.  Every marshal’s car had a bike leant against it and someone shivering under a silver blanket.  The locals on the course were great, lots of support and tea for those broken down.  Before I knew it I was at Revels Hill, I got in the Granny Gear, sat down and did the work.   It was a bastard of a hill, but I got up there. Not fast, not pretty, but at the top.  The next section was downhill, fast, with beautiful scenery.  I had a nice chat with a lad doing his first ever tri.  Bonkers.  Then out in the middle of nowhere I heard a shout of ‘Tori!’.  It was Seren, Freya and Max, my friends’ kids.  It was BRILLIANT!!!! I was so excited as I never have any supporters on the course!  A few more k’s saw me through Dorch, up a couple of hills, along by some billion-pound horse stud and cresting the hill above Weymouth, where the sun was shining on the Bay, making it look like the Med, not the storm raged sea that I had been swimming in 4 hours earlier.  Downhill all the way for the last few K and back in to T2.  I’d survived!!! I could not believe it!  Half of my gang were also in  T2 and Fran and I agreed we would run together.    The job of putting on dry trainers and socks was a luxury, they felt like warm slippers compare to the manky wet bike shoes that I had just taken off.

The sun was shining, there was a nice breeze and the crowds were all shouting.  Fran and I set off using a 3.00/0:30 run walk ratio.  Our names on our vests worked a treat with people shouting for you by name.  After 1 full lap of the 3.5 seafront circuits the pain in my leg meant that Fran and I were running at different paces, so we split up, knowing we’d see each other plenty of times on the course. The support from Pompey Tri who were basing themselves near the finish line was incredible.  The marshals at the aid stations were so good.  I took on coke at every station and a couple of half bananas.  I was actually enjoying the run, I didn’t feel utterly broken and my hip wasn’t causing me too many problems.  On my final lap, the numbers had dwindled and I did walk more than the 30 seconds, but I still felt pretty good.  I kept enough in the tank to make sure I could run the section by the pubs where spectators were getting drunker which each lap, and then round to the finish.  I remembered to ditch my bottle and take my glasses off for my finishers picture – great tips!  Through the finish, medal round my neck and inside to the food and t-shirts where several of my mermaids were waiting.   A few tears but not the usual full breakdown from me.  Perhaps another benefit of interval running and not getting to the end totally ruined.

I joined the Pompey Tri gang to cheer the remaining runners home – what an atmosphere!  I have always been slightly on the peripherals of the club, as my kid’s football commitments have prevented me from attending too many ‘official’ sessions, but after the support, encouragement and kindness shown to me at Weymouth I have no longer feel on the edges.

IM Weymouth 70.3 done and dusted in 7hr 30min.  It’s been so long in the planning and training I am sad that it is all over and I am already feeling a bit lost.  Training with my gang has been such a great experience.  I have definitely won the lottery when it comes to mates.  I have found out I can do so much more that I would every believe and sharing it with my gang has made that even more special.