Fran (Marshman) and I arrived at the venue, Cotswolds Water Park, on Saturday in time to register, check out the lake and then go to the 4 pm briefing. The briefing was very detailed but quite light hearted. We also paid for the race day parking ticket which was over the road in bumpy, thistly field. There were a few stalls selling tri related stuff. The water park is a great place and I will definitely take my boys there for a day out. 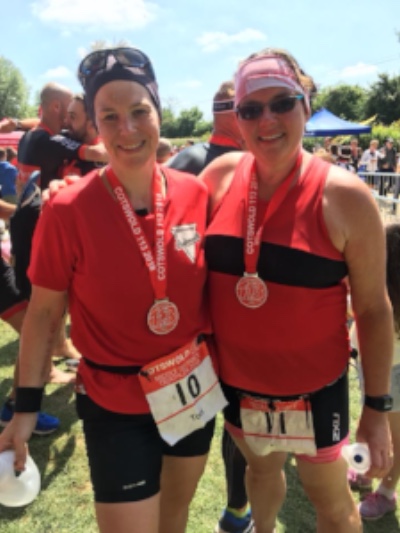 We then headed off, map in hand, to drive the bike route. It was a long stretch back out to, and then over the A417, then on to country lanes. It was almost a figure of 8 shape so mentally we broke it down in to a top loop and a bottom loop, plus the straight back to the water park. The whole route had to be done twice. There was one climb, at the bottom of the second loop, which would need to be tackled twice.

We then headed off to the hotel, bought some flip flops, got some food, faffed about with our kit and set our alarms for 03:15.

I managed to sleep quite well, and after a cup of tea and application of P20 sun cream we had our bags and bikes back in the van ready to head off to the race venue. We arrived about 04:45 and ate our overnight oats with our stolen hotel spoons in the car park surrounded by other nervous looking Triathletes.

Transition was filling up, you had to rack in accordance with your race number which was a really good procedure, as everyone got the same amount of space. The lake looked a bit foggy as we went down to the Wave 1 start, ready for the briefing at 05:50, only to be told that the start was postponed for 30 mins for safety. This caused a lot of restlessness and walking up and down. The start was delayed a further 2 times, giving us an eventual 07:30 start time which got a big cheer!

The swim was great . I stayed to the side, towards the back and just chugged my way round. I didn’t get bashed or kicked. My sighting needs work as I wasn’t always heading in the most direct route to the next buoy.

My T1 was slow but I’m not sure quite why – I wasn’t aiming to break any records so it was no big deal.

Out on the bike and immediately I was being overtaken by big boys on their TT bikes which was a bit disheartening . I just had to trust my bike computer and believe that I really was averaging 27.5 km/hr. the roads were really rough with lots of pot holes. I remembered where a lot of them were from our drive through. There was a casualty in the ditch within half a mile of the start, a stark reminder to watch the road surface. I just chugged on, counting the k’s, doing percentages in my head. Jo Lovell’s training on feed stations was really useful. I did stop on the first loop to add my Tailwind to my new bottle, but I felt ok doing that. On the second loop I just grabbed a bottle on the move – owning it like a pro! Jo, you’d be proud!

T2 was slow as there was a queue for the portaloos. The run was 3 loops around the main lake, out on to the road, round another lake and back…..passed the finish…..twice. My legs really didn’t want to work, but I just kept putting one foot in front of the next. By now it was scorching hot. Fairly quickly I talked myself in to a run/walk strategy. 9 min run, 1 min walk. I then went to 4/1 which was better. I always seemed to be walking where there were crowds though! I stopped at each feed station and topped up my water and had a half banana. Mentally I found the run tough. My quads were tight from working hard on the bike. I was wishing I had taken time to put my running socks on (should’ve biked in my running socks, not the other way round). The second loop was really tough, the third loop I just gritted my teeth and got through it. My delight at 16k when I could tell myself that there is only Park Run left to do. Seeing Fran at the finish to meet me, already in tears, was just incredible. There was huge camaraderie at the finish, it was a great vibe.

The drive home was interesting with my legs not always doing what was needed of them!

I couldn’t have shared the day with a better person, I’m truly lucky to have had Fran with me.

I’m over the moon with my time, I wanted sub 8 hours so 6:48 will do!  When I got back and saw the messages on Facebook where our ‘gang’ had been tracking Fran and I it really brought home what a fantastic bunch of people I train with.   It also transpired that it was 3 years almost to the day from doing my first Super Sprint (Portsmouth Try a Tri 2015) to completing a 70.3 Middle Distance event.

Things I’ve learned:
P20 sun cream is great. It stinks, but it’s great.
2 piece trisuits are the way forward.
Tailwind is pretty good stuff
I need to lose another 2 stone
I need to run more off the bike
I need to have a run/walk ratio I can do for 13.1 miles
I hang around with some of the BEST folk who support and encourage me to be so much better than I thought I could be.  FACT.